Samuel Mason is a futurist, and President of the Tesla Science Foundation for the State of New Jersey. As a Tesla Ambassador he has organized countless Tesla related programs across the globe for various organizations. Mr. Mason is the Founder and Director of the newly established Tesla Community Incubator Space (TCIS) in Rahway, New Jersey. He has 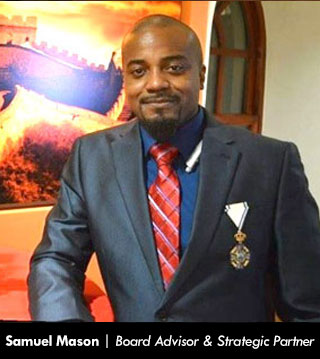 Mr. Mason has also coordinated high impact Tesla technology presentations for prestigious organizations such as The Advanced Energy Center of Stony Brook University, The New York Hall of Science, the Franklin Institute, the Tesla Museum of Belgrade, the Tesla Science Center, the Turkish Chambers of Electrical Engineers, IEEE, U.S Army and many others. Mr Mason serves of the board of the International Innovation Centers and serves as the Chairman of the Advanced Aerospace Education Subcommittee within the New Jersey Aerospace Education Council As a United States Civil Air Patrol Aerospace Educator, Mr. Mason has utilized the aerospace curriculum to teach Tesla inspired programs on advanced unmanned aerial systems and the civic minded use of American airspace in a form complementary to the legacy of Tesla. Educating captains of industry, heads of academia and high ranking government officials on the science of Tesla, Mr. Mason has a broad spectrum of advanced STEM/STEAM human centric automation programs for all ages.

As an innovation specialist and subject matter expert on crypto currency integration into smart cities, Mr. Mason’s passion for creating the world the great inventor intended is achieved through cultivating blockchain backed environments that positively encourage those seeking to innovate in the footsteps of NikolaTesla.

BROWSE HIS VIDEOS OF INTEREST:

My work with the Nikola Tesla Institute of Brazil