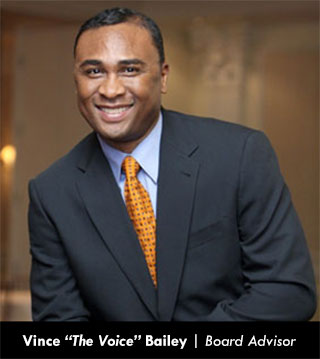 Vince “The Voice” Bailey is a 35 year media veteran who began his career as a United Way volunteer reader for the blind in his hometown of Gary, Indiana. For the past seventeen years he has operated Vince Bailey Productions (now Vince The Voice LLC), a full service audio / video production and consulting company.

He is an announcer for professional sporting events and media broadcasts including the Atlanta Dream (WNBA Basketball team), the Georgia Force (Arena Football), Professional Boxing, Professional Ballroom Dancing, Audiobooks, Voicemail Systems, and continues to provide voice talent for radio and television commercial clients nationwide. He has received numerous awards and acknowledgements for his work, but takes greatest pride in the mentoring he has provided to many young media professionals. Currently Vince teaches Voiceover at Clayton State University.